I knew this’d happen. The mere mention of “Narvaez” makes you feel strange.  Your spine tingles. Narvaez. How do you spell that? What is it? What’s it involve?

You don’t know much so you’re taking your chances the first time you go down this road. How far do you think you can get before you lose your nerve and turn around?

Times have been tough and you’re looking for a break. Break down your inhibitions is my advice and keep going. We’re not complete neophytes on this island and there’s property in the family over here. And you heal fast so it’s all good. Don’t worry.

We were driving a great white whale of an ancient four-door North American ten-mile-to-the- gallon hard-top the first time all the bravery kicked in and we were back on the island.  I don’t know how many litres that is but I suppose I could check.  I can tell you this—gas was 50 cents a litre in this epoch.

And it had a “vinyl” top too that wasn’t in bad shape. It was beautiful. Leatherette upholstery inside. We felt extremely mature.

We drove in the ancient beast to see what we could see down here. The stone house was a lot smaller then, easy to miss when you didn’t even know about it and weren’t looking for it.  There were no grandiose schemes in progress.

There’s nothing here and this looks easy so we walked down to the water. We knew the whole story about the Spanish guy and the buried treasure and all that but weren’t concerned.

Narvaez Bay, and we’d learned to pronounce it, we’d been practicing the whole way, was in a dramatically peaceful state. I noticed right off, once again, how there’s nobody around.

The sky was overcast, the ceiling high and everything was dead calm. Absolutely dead calm which can only be truly appreciated when there isn’t a solitary sound from anything except the quiet lapping of the water at the shoreline. 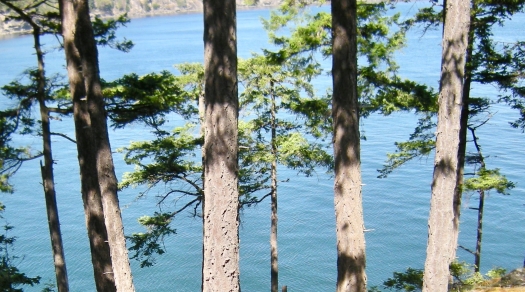 That sounds kind of poetic and that’s exactly what I was doing, sitting on a rock and reading from a paperback book of poetry I’d put in my hip pocket getting out of the car. I didn’t think this could be any more outlandish than a lot of other things that must be going on around here.

This strange place, Narvaez. I hadn’t looked at this particular poet before and haven’t since. I just think that sometimes there’s something lost in translation.  It was a Brazilian poet.

There was a house up the slope behind us from the water, a single, solitary one story house wider than it was tall and I was interested recently to see it’s still there and it still looks like nobody’s home.

I like it when nobody’s home. You’re on your own, but it’s always nice when people come home too.

The drive back Narvaez Bay Road that, like the Bay itself, shelters many mysteries, and we were back at what we used to call “the lower store”. Getting back to catch the ferry for the return part of the day trip.

Pulled up same as it is today. Right in front. Big “Dick” was the proprietor. Dick, I’d heard somehow, had been a professional golfer at one time. I remember being quite amazed that this could be true but I never really talked much to Dick.

But I could have just once engaged Dick in a super quick query about golf, right?  Because I used to golf myself so know something about the game.  I could have said how much my life had improved since I quit golf and had it been the same for him? I always like to start with a joke. You could get the paper from town at that store.

We were informed by a young gentleman riding in the front passenger seat of a car that pulled in beside us before we entered the store, in the friendliest, innocent way, that we were the people that were out Narvaez Bay.

“It’s all private property out there,” the young man said.