I didn’t realize until I saw for myself. They put a monster building on the site of the old Black Top taxi lot and disappeared the “Beach Cafe” coffee shop at 701 Beach Avenue. The coffee shop was in the old style with round stools with red vinyl padded seats at a counter and a few booths where generations of hard-driving cab drivers tried to drink enough coffee to obliterate the miserableness of their lousy cab driver existences.

The walls of the coffee shop were adorned with a few old, framed black & whites of extinct Black Top cabs and their extinct drivers.  The taxi offices, such as they were, were connected to the cafe.  The shift dispatcher, the formidable and indomitable Ella Read, took and made calls from an office the size of a closet.  She sat in there all day working the phone and smoking cigarettes.  When I didn’t have a steady car, that is the same car with the same number for the same shift five days a week, I worked “spare”, as it was called.

The call would come from Ella in the early afternoon asking if I wanted a car for tonight.  If she was calling and I hadn’t already worked five days that week as a spare it was a good idea to say, “Yes” or Ella would come through the phone line and bight me.  I think, though, that inside her hard exterior was a soft interior.

She’d give me the car number and I’d come down to the lot at the appropriate time, pick up the keys in the driver’s room with the sheet, being the legal-sized “trip sheet” with the carbon copy where you were supposed to record every “trip” involving a paying customer or customers and the time and the pick-up and drop-off location, and then I’d head out to the lot to find the car.  Sometimes it was on the lot, sometimes it was parked on the street somewhere near the lot and sometimes there was no car because the day driver had a longer last trip than he’d planned on.  If he was more than a few minutes late he’d give me a couple of bucks to make up for it.  I remember only two lady cab drivers.

The gas station next door at 711 Beach Avenue is history too although the shell is still there with the old pumps. The fleet used to be all gas powered then it went to natural gas. It was common on the afternoon shift which was 3:45 p.m. to 2:45 a.m. to drive two or three hundred miles and go through at least two full tanks of gas.

If I got low on gas and was far from the lot gas station I bought gas at a gas station and put the receipt in the cash envelope at the end of the shift, deducting the amount of that gas as well as the gas from the lot pumps from the car owner’s take for the night.  The split was 50 – 50 after that between the owner and the driver with two per-cent deducted from the driver’s share and held back for income tax.

Unless a trip was dispatched it didn’t necessarily have to go on the trip sheet.  This was when you picked up a “flag” fare, somebody waving at you to pick them up if there was nobody but you in the cab.  It was a hard-scrabble hustle business and if you were getting lots of flags on a busy night you wouldn’t record them all and the cash was yours. Everybody did that within reason.  It was a cash business.  Only a fool of a cab driver would ever accept a cheque for a trip.  There were credit cards, and taxi vouchers and company accounts, but no debit cards.

Few gas stations at the time also dispensed natural gas so if the cab ran low it could still be switched to run on gas.  When I was out of natural gas and had a trip downtown I could make it into the lot to re-fill on natural gas.  Driving a cab for ten or eleven hours wasn’t necessarily a gas.

On the afternoon shift I didn’t have to stay out until 2:45 a.m.  I could park the car around 2 a.m. especially if the night was slow.  Graveyard shifts were 6 p.m. to 6 a.m. with the expectation that the cab would be in service the entire 12 hours.  Some drivers only worked graveyard, some only worked day shift.  In my career I worked all three shifts, most of them afternoon but occasionally I’d opt for the thrills, chills and spills of graveyard.  Cool. Graveyard. 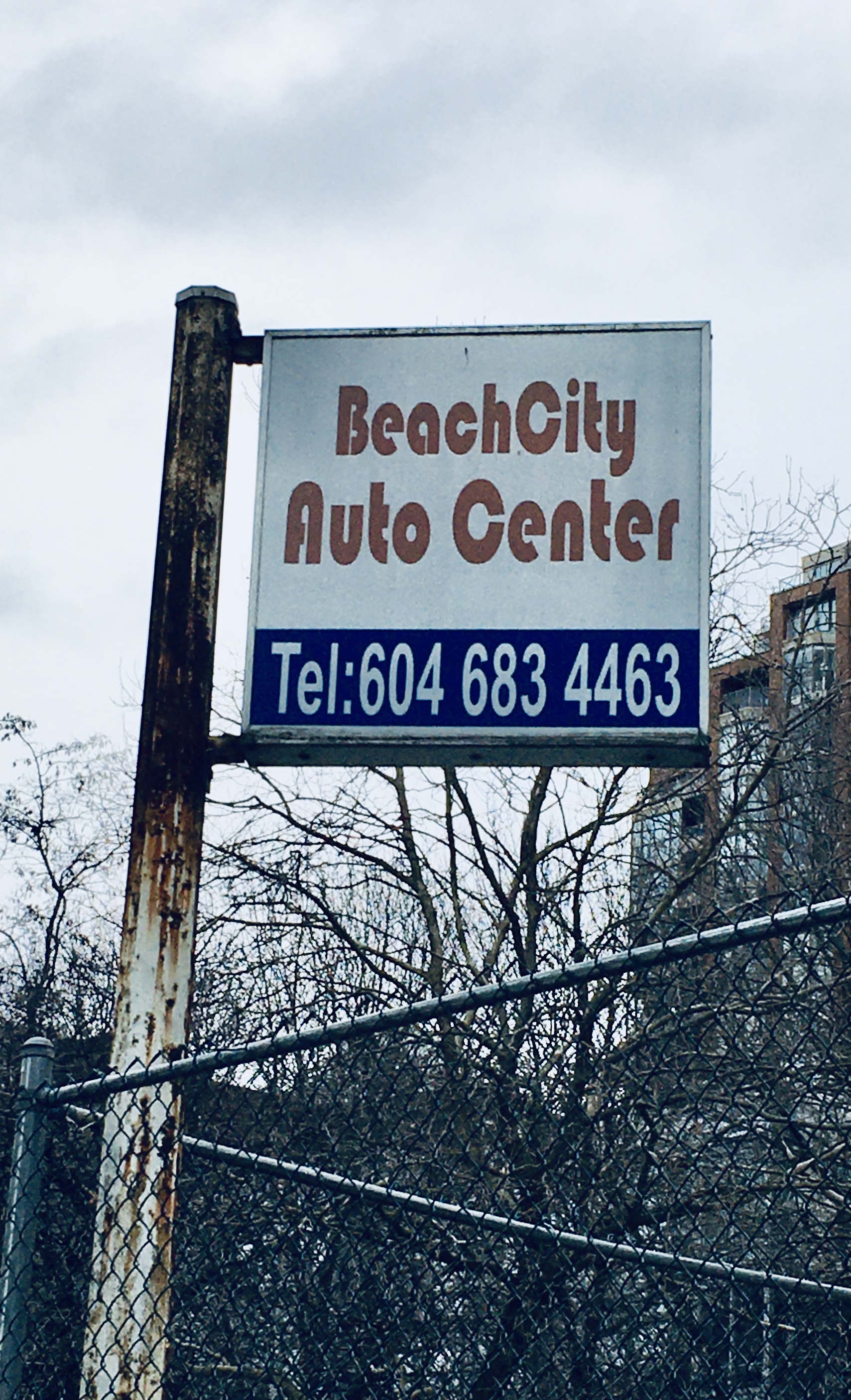 This sign wasn’t in place during my career.  It’s at the northwest corner of the taxi gas station.  The chain link is new too, much newer than the sign.  That pole has to go.

Then there’s this thing.  It’s hanging above Beach Avenue from the underside of a section of the famed Granville Street bridge just past what would have been the eastern end of the Black Top cab lot.  The cab lot and the high, vaulting, dun grey concrete of the bridge support arches towering directly above what at one time had been the False Creek terminus of downtown Granville Street before the bridge was built wasn’t much to look at unless you loved driving cab and lots of dun grey concrete.

I called cab driving the worst job in the world.  I was never robbed or threatened by anyone and only ever physically removed a customer for being drunk and disorderly once. I doubt that it was the worst job in the world, then or now, but the pay was lousy considering all the hours in a shift and wouldn’t be great today either.  But it was better than nothing which is what I was looking at otherwise, at the time.  Today all the Black Top cabs still have black roofs and yellow bodies but the drivers now, who used to be all white, are all brown.  And I doubt very many of them can afford to live in Vancouver where they do most of their driving. These chandelier things and just about everything else in town costs more than it used to.